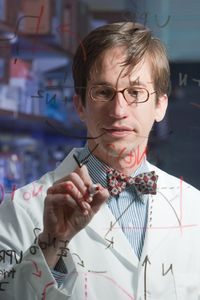 Dr. Santiago Schnell earned his undergraduate degree in biology from Universidad Simón Bolívar (Venezuela), and then his doctorate degree in mathematical biology from the University of Oxford (United Kingdom) in 2002. Dr. Schnell held two prestigious research positions at the University of Oxford between 2002‐2004: Junior Research Fellow at Christ Church (a college of Oxford) and Senior Research Fellow of the Wellcome Trust at the Wolfson Centre for Mathematical Biology.  He was appointed as an assistant professor at Indiana University in 2004, and joined the faculty at the University of Michigan in 2008 as an associate professor in the Department of Molecular & Integrative Physiology, and a William K. Brehm Investigator at the Michigan Comprehensive Diabetes Center. In 2013, he was jointly appointed as associate professor in the Department of Computational Medicine and Bioinformatics.  He was promoted to professor in both departments in 2015, appointed as the John A. Jacquez Collegiate Professor of Physiology in 2016, and has been serving as chair of the Department of Molecular & Integrative Physiology since 2017.

Dr. Schnell and his research group develop methods and models to obtain high-quality measurements with rigor, reproducibility, and robustness in the biomedical sciences. Dr. Schnell’s research departs from the premise that there is a continuum between health and disease. If we are capable of measuring this continuum, we will be in the position of detecting disease earlier and understanding it better to intervene more precisely. Dr. Schnell work has substantially altered the view of measuring and modeling enzyme-catalyzed reactions under non-physiology and physiological conditions. He has also made substantive contributions in diverse areas by developing mathematical models of complex physiological systems with the goal of identifying the key mechanisms underlying the behavior of the system as a whole.

An internationally renowned theoretical physiologist and mathematical biologist, Dr. Schnell has published over 145 peer-reviewed publications, one book and has received multiple awards in recognition of his research and teaching endeavors. He is Fellow of the Royal Society of Chemistry, the American Association for the Advancement of Science, the Society for Mathematical Biology, and the Latin American Academy of Sciences. He is also a US National Academy of Medicine Emerging Leader in Health and Medicine. Dr. Schnell has remained funded by external and internal sources throughout his career. He served as associate director of the Indiana University Biocomplexity Institute and President of the Society for Mathematical Biology. He serves in the editorial boards of Biophysical Chemistry, Biomolecular Concepts, Cancer Research, Current Opinion in Systems Biology, and Journal of Theoretical Biology. He is currently the Editor-in-Chief of Mathematical Biosciences.